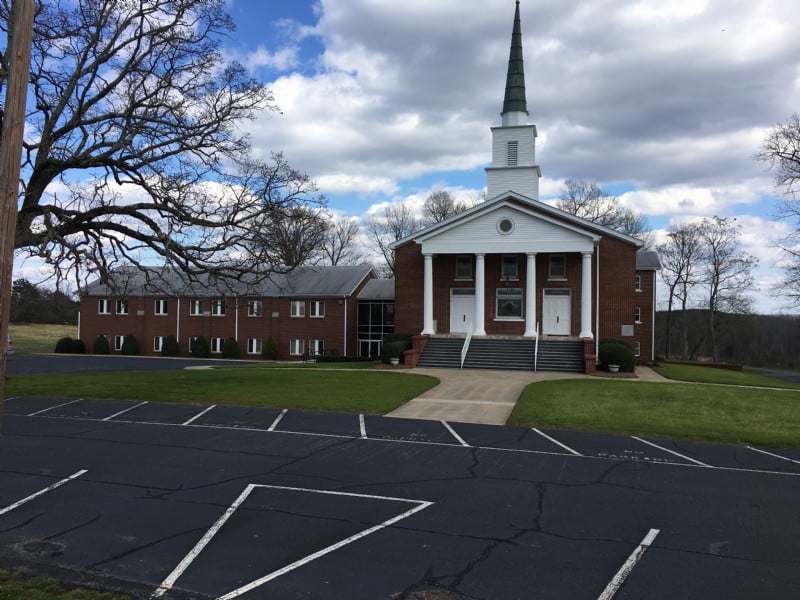 (located in the Green Creek Community)

The church was organized in 1796 by two brothers, John and Joel Blackwell.  These men had fought in the revolutionary war and after the war settled in the Green Creek area. Seeing the spiritual needs of the area, the two men brought area residents together to form a church.  Green Creek First Baptist gets its name from Green’s Creek, which flowed near the site of the first church building.  For many years, the church was known as Green’s Creek Baptist Church.

The first two houses of worship were located on Jack Branch, about one half mile from where it flowed into Green’s Creek.  Both were small log structures.  In 1980, a marker was erected just off Coxe Road to mark the original site.

The present church building was built in 1951.  It is a three story, brick building with a sanctuary seating capacity of 400.  The present location is in the geographical center of Green Creek township, Polk County, NC.

Following its first pastor, the Rev. John Blackwell, a long line of dedicated men have served as pastor.

In 1990, the church again undertook a building project, this time to erect a new educational building and fellowship hall.  This project was completed and dedicated during the ministry of Dr. Carroll Page.  The dedication service was held June 28th, 1992.

In 1992, the church purchased the old Green Creek School property across the road from the church.  The church called Dr. Don McIntyre as pastor in January, 1996. A Family Life Center was established on the old school property. At the celebration of 200 years of existence, September 1, 1996, the congregation joined in the burning of the note, retiring all indebtedness on church properties.  The center is a great service to the community of Polk County.

The church began a Hispanic Ministry with Rev. Juan Malino, as the pastor.  He is now pastoring the Alpha and Omega Spanish Church in Landrum.

After serving Green Creek First for 10 years, Dr. Don McIntyre retired at the end of December in 2005. The church began an affiliation with the Billy Graham Evangelistic Association Television Telephone Ministry in 2005.  BGEA televises old and new crusades each Wednesday and Saturday and we team with other centers around the country to answer phones for those who call in on Wednesday evenings.  We also answer calls for national telecasts which run 1-4 times a year.  These telecasts are for 9 days.  Calls come from those who are seeking a relationship with Christ through salvation and rededication.  We also receive many calls for prayer and encouragement.  This has been a ministry with many, many blessings and we are constantly amazed and grateful the Lord has allowed us to be involved.

The church has on staff a Youth Minister.  The youth have done mission work in another state, another country as well as local missions.

The church continues to grow and seek the Lord’s will for HIS service.   All praise is given to HIM!