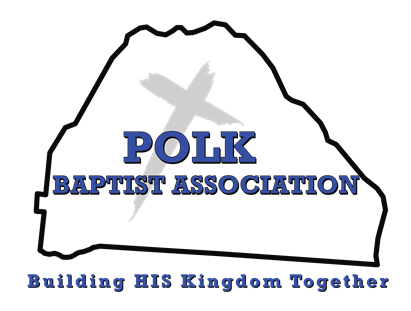 There were several factors that led to the organizing of the Polk Baptist Association.

There is no doubt about the guidance of the Holy Spirit in this dramatic move. The

distance  for local churches to travel to the other associations, hindered involvement in those associations. A closer unit of ministry and missions was needful and practical for the churches located in this area. A local association allowed for pooling of more church resources, gifts, talents for mission ministry. Truly those who first envisioned this endeavor was led by a strong faith in God’s reality, His resources and His rewards.

Since it’s humble beginning in 1969, the churches of the Polk Baptist Association have joined hand in hand, heart to heart, willing to be used as instruments in the hands of the Lord Jesus Christ, for the spreading of the gospel and for the good of people in Polk County and even around the world. These churches worshipping, working and witnessing, individually and together have accomplished much under the leadership of the Holy Spirit, for the good of mankind and for the glory of God. All of the glory belongs to God!

From the Rutherford County line on the East, to Saluda, NC on the west, from Lake Lure in the north, to the South Carolina line in the south, there are twenty-four churches striving to seek the Lord’s will in ministry and mission outreach, here in Polk County,and to the ends of the earth.

The desire of this association is to carry out the “Great Commission”, given by the Lord Jesus Christ in Matthew 28: 18-20, by working together with our churches, sister associations, the Baptist State Convention of NC, the Southern Baptist Convention and affiliated ministries, agencies, etc., of like minded faith and practice.  Our churches are made up of Conservative

believers. We believe in the total inspiration, inerrancy and infallibility of the Bible, God’s holy word.

Directors of Missions who have served: